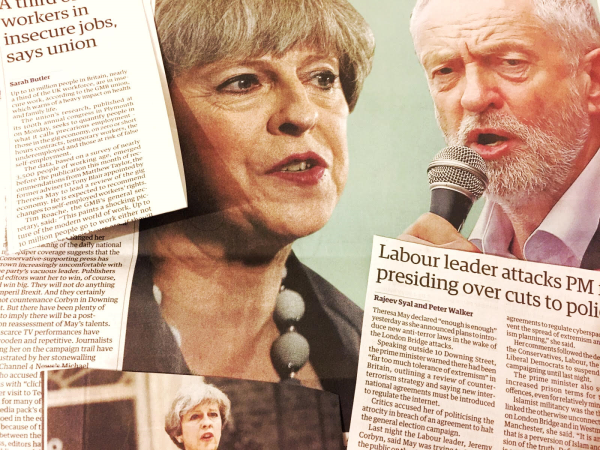 As we are approaching election day in the UK, I am one of many people still undecided about who to vote for.  My previously staunch Labour family are seriously considering changing their colours and people up and down the country are wondering who best to lead what have the potential to be disastrous Brexit negotiations.

It’s going to be a tough job so you have to wonder who would want it!

In terms of contenders, it’s really a two horse race thanks to our first past the post-election system which keeps the other parties in their place.  Whilst I would like things to be more fair, the fact is that many voters are thinking Corbyn or May and if you’re not sure, then it’s a pretty tough choice.

Corbyn carried the can in many ways for the remain campaign defeat as he was accused of failing to provide a strong voice for those who wanted the UK to stay in the European Union.  Media articles suggested that he actually wanted to leave himself and who doesn’t accept that the union needs reform but the British people decided to go for broke so if he is elected, he’ll have to navigate some tricky negotiations to try and get a decent deal for Britain.

Theresa May’s position was that we are better ‘in’ but when challenged on her ability to lead the nation towards independence given her personal views, she answered “we gave people the choice and the British people decided to leave. Now we have to deliver on that choice and respect the will of the people”.  The role of Prime Minister now is to deliver what people want.

This chimes with a previous blog post which considered the role of elected representatives and whether once elected they should do what they think is best or what the electorate want.  Maybe it is better that these negotiations are led by someone who can deliver the will of the 52% leave voters but protect the concerns of the 48% who voted to remain.

It’s a difficult choice in this election and I have a feeling that the Prime Minister will get the mandate that she is looking for from the British people although if the polls are anything to go by, not with the majority she hoped for.

So why does she seem like such a strong candidate?  Apart from the systemic issue previously highlighted, Corbyn divides his own party so how can he unite a nation at a particularly turbulent time?

My husband came home from work recently and asked me ‘why don’t people like Corbyn?’.  For me, it’s because he doesn’t look ready to do the job and whilst I know it shouldn’t be about that, I wouldn’t hire someone who turns up for a job interview not looking smart so I’m not keen to have a Prime Minister who can’t dress for the occasion.  What would he consider appropriate for an important diplomatic meeting?  I can’t be certain and that concerns me.

Watching interviews with Andrew Marr and Jeremy Paxman, I was pleased to see he did dig a suit out of the wardrobe.  He also seemed considered in his responses and I found that he had good points to make and I wanted to listen to him.  He might have some positions which are controversial but I like his policies on the living wage, zero hours contracts and public services and he is clearly a socialist to the core.

May on the other hand was ‘on message’ with the Conservative vision for the future which she says will be secure and have a strong economy.  Will the public services be safe? Who knows. Her focus, she says, is on getting a good deal in the Brexit negotiations and strengthening the economy overall.

She did have a very clear call to action for all those people able to have their say in this election and that was for everyone to go out and vote regardless of their colours.  As the Prime Minister herself said “this is the most important election of our lifetime” so make sure you turn out on Thursday and make your voice heard.