Recently, I was on the recruitment panel for a senior position in an organisation I’m involved with. A week or so later, I found myself watching the Olympic games on TV and thinking about the similarities between gymnastics and interviews.

Gymnastics and interviews? How do they relate to each other? I hear you ask.

Well, after spending a couple of evenings watching the competition, I realised that it doesn’t matter how much a gymnast prepares… how much they train… how much they practice… they cannot guarantee a perfect performance. Any manoeuvre on the floor, the vault, the beam, parallel bars, anything has to be perfectly timed. The gymnast has to consider speed, weight, balance and I’m sure lots of other things and as humans, they can’t be so precise that it guarantees success. 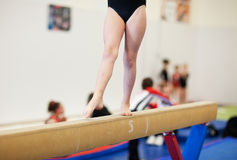 As I watched, I saw plenty of them misjudge speed, distance, timing and so on. Some slipped, fell, stepped off the matt, over-balanced – a whole manner of things that prevented a perfect performance. Despite being world champion, Japanese competitor Kohei Uchimura fell from the horizontal bar. Louis Smith took home a silver medal from the London Olympics and yet this year he fell from the pommel horse which handed the bronze medal to the Chinese.

Even if an athlete gives their very best performance, their success depends on the competition.

In the men’s gymnastics competition, in between events, they were covering their heads, really trying to not think about what was happening around them but focus on what they had to do. This reminded me of a talk given by Sally Gunnel at a leadership event a few years ago (watch the full talk here).

Sally’s key message that day was around the importance of running your own race. She learnt this when she lost the gold medal in the 1991 World Championships when she made the mistake of looking sideways. This slip of focus left her in second place.

After that she concentrated on giving her best performance and not comparing herself to others. By focusing on herself, she achieved the ultimate goal, picking up a Gold medal in the 1992 Olympics for 400m hurdles.

It’s the same for interviews. If you want to progress you need to keep the end goal at the forefront of your mind. Concentrate on developing and honing skills and experience. Do your best in every competition and with hard work, commitment and determination, eventually, you will take the Gold.
3minuteleadership.org